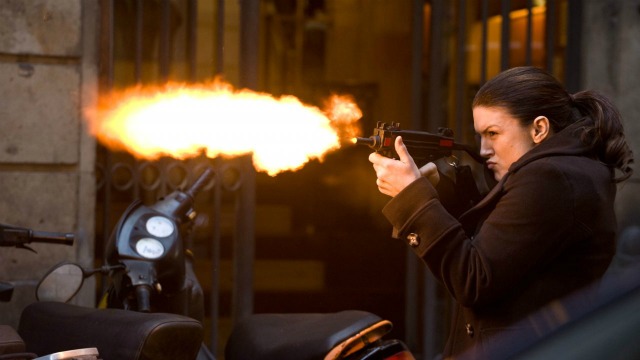 You’d be right to be dubious about Steven Soderbergh’s latest globe-trotting spy-thriller Haywire, given the story behind film’s genesis. Supposedly when flicking through channels one night, the director came across an MMA fight featuring mixed martial-artist and ex-American Gladiator Gina Carano, which left such an impression he decided to write a picture centered around her physical strengths right then and there. Hardly grounds for much excitement if you ask me. However, while this raison d’etre exposes a certain airheadedness, the end product’s lean and efficient operation delivers on it’s modest ambition with a cool confidence, utilising a slew of fantastically choreographed action sequences that span rooftops, diner cars, city streets and picaresque beaches.

Carano plays Mallory Kane, a government operative for-hire, ex-Marine and daddy’s girl, who becomes embroiled in a deadly game of cat-and-mouse when a job in Dublin goes bad, forcing her to flee from her superiors under fear of a set-up. It’s a rote story arc of government conspiracy, betrayal and revenge that favours function over believability, and screenwriter Lem Dobbs’ doesn’t make any attempts to fetter his characters with subplots or independent lives outside of their jobs. The main draw after all is Carano herself and the fists and kicks she wields, why spoil it with exposition? That may be why the screenplay’s central schema is a series of fill-in-the-blank flashbacks, each crafted in such a way that the audience is only handed the information it needs at that given moment. Nothing more, nothing less.

An introductory face-off with an ex-beau (Channing Tatum) sets the pace for the fight scenes within the film, which rarely deviate from the format of: quiet build up, explosive close-quarters confrontation and swift getaway. Nevertheless, unlike much of the current action-genre landscape with it’s bevy of homogeneous shaky-cam headaches, each instance plays off with creative verve, usually employing the various settings as a means to differentiate: a rooftop chase through the grey streets of Dublin offers glimpses of parkour, the snowy forests of North America gives way to car chases, a hotel room spat with a fellow government agent (Michael Fassbender) resorts in a sexually charged wrestling match. And Carano impresses throughout — despite the first-time-actor label and the daunting responsibility of having to carry an entire feature on one’s shoulders, there is not one scene in which her feats feel forced or out of her comfort zone, which makes watching her all the more pleasurable. Even when not kicking someone in the face her acting is surprisingly robust, as evidenced by her ability to go tete-a-tete with Fassbender’s suave secret agent in one particularly magnetic scene of psychological foreplay — although her voice can tend towards the monotone (but to be honest, I wouldn’t expect a stocky ex-Marine to be the most expressive of talkers).

Though Carano is indeed an attractive action-heroine –and Soderbergh’s insistence on photographing everything with a soft, romantic glow attempts to leverage that allure– the film itself has about as much sex appeal as a married Catholic couple assuming the missionary position. So clearly rooted in the Oceans Eleven series’ methodical proceduralism, the camera is fastidiously obsessed with patient wide-shots, calculated rhythms and muted palettes, which can be stifling considering the fast-paced and vibrant nature of the combat. Kill Bill-esque relish and exuberance you won’t find here.

One editing flourish during a third-act confrontation between Mallory and a partner (Ewan Mcgregor), which cuts up one piece of action between 3 or 4 ‘180 degree rule’-breaking angles all at once is a notable stylistic achievement, and reminds you of the kind of visual invention so sorely lacking in the 70 minutes prior. But otherwise we’re left with an able-bodied, if rather staid, piece of genre-filmmaking. Carano supplies the muscle.