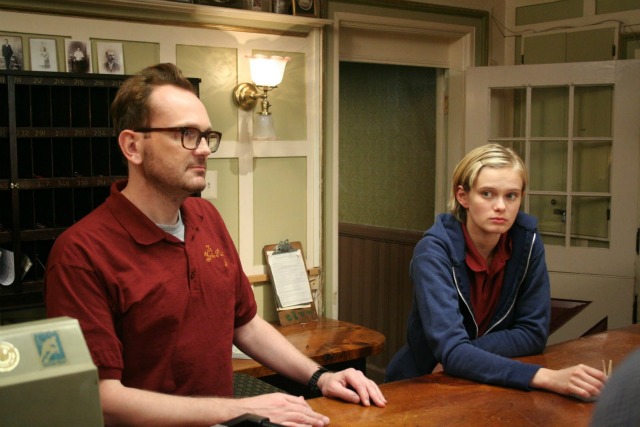 Ti West has made quite a distinct impact on the horror scene despite having only three previous films under his belt (the fourth, Cabin Fever 2: Spring Fever, is formally accredited to him even though he walked away from the project citing creative differences). His approach is often classified as ‘slow-burning’; something which delighted and frustrated fans of his last film The House of the Devil to equal degree. The Innkeepers brings over a few of that film’s stylistic trademarks, such as roving hallway shots, suspicious doors, long silences and a fascination with retro (no mobile phones here, and one character’s attempt to rush into the web-design business reveals a late-’90s state of the internet). Yet where it differs most from Ti West’s previous films, and where it undeniably excels, is in charm; something conjured almost entirely by the sprightly, skittish lead Sara Paxton.

She plays Claire, an employee of the soon to be out-of-business Yankee Pedlar hotel, who is entrusted with keeping watch over the place in it’s final days while the owner is on vacation. Her fellow innkeeper Luke (Pat Healey) spends most of his time on his laptop, hunting down ghost stories and occasionally scaring Claire with them. Their slackerly, banter-filled relationship drives most of the film, with the only other characters being a handful of tenants such as a bitter actress and a man returning to his honeymoon location, who each may or may not have their own secret agendas. On discovering that the very hotel they’re in might be haunted, Claire decides to investigate, leading her to the hotel’s derelict basement, audio recorder in-tow. The scares that ultimately unravel are of the predictable kind, though they’re made doubly entertaining by Claire’s child-like overreactions. At times it’s as if she is channeling a Disney character that has wandered off onto the wrong set. Those not hip to her adorability may find that this takes away from the scares, but in a film that’s so weighted towards comic fun over grim unease, she becomes the film’s main jewel.

Unfortunately the ending leaves much to be desired, both in terms of tension and closure. Not all of the characters’ motivations are made clear leaving the audience with unnecessary gaps to fill in, and the meagre shocks that end up happening in the much-anticipated basement setting remind us of the film’s small budget and the relatively vacuous story. Yet in the face of it’s paltry payoffs, we’re left with a lot of great comedy and a delightfully winning performance by Paxton. She embodies the best of what the film has to offer; a goofy sense of play.