Save your family or save humanity? A question that must be answered in M. Night Shyamalan‘s next chiller Knock At The Cabin. The film is heading to UK cinemas in February, today Universal Pictures tease in the film’s first Poster.

Terror is ominous in the Poster with Dave Bautista, Rupert Grint, Nikki Amuka-Bird, and Abby Quinn. They are all standing facing the cabin, some with weapons. Why Jonathan Groff, Ben Aldridge with Kirsten Cui? It’s sometimes impossible to say, if you have read Paul Tremblay’s book  The Cabin at the End of the World you’ll know why.

A couple and their young daughter find themselves taken hostage at their holiday cabin. The peaceful break is broken when four armed strangers take them hostage. Forcing the family into the unthinkable to avert the upcoming Apocalypse. If they don’t abide the world will end, or will it? Access to the outside world is limited.. 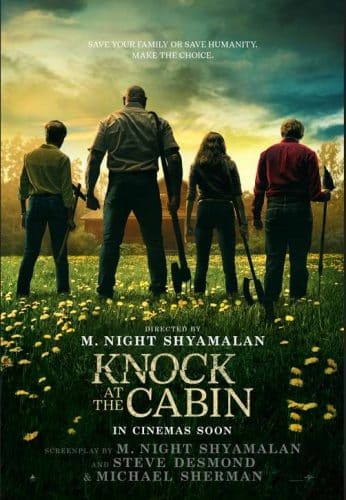 While vacationing at a remote cabin, a young girl and her parents are taken hostage by four armed strangers who demand that the family make an unthinkable choice to avert the apocalypse. With limited access to the outside world, the family must decide what they believe before all is lost.
From visionary filmmaker M. Night Shyamalan, Knock at the Cabin stars Dave Bautista (Dune, Guardians of the Galaxy franchise), Tony award and Emmy nominee Jonathan Groff (Hamilton, Mindhunter), Ben Aldridge (Pennyworth, Fleabag), BAFTA nominee Nikki Amuka-Bird (Persuasion, Old), newcomer Kristen Cui, Abby Quinn (Little Women, Landline) and Rupert Grint (Servant, Harry Potter franchise).

Knock At The Cabin will be released in UK, Irish and U.S cinemas from the 3rd February 2023.