Have you ever played Fishbowl, or its equivalent? You know, the popular game where you put suggestions in a bowl and the team has to figure out what it is without saying any words connected to it? Or how about Paper Fortune Teller? The one where you guess a number to determine which segment gets turned over with a challenge or a dare? Looks like origami? It may be something of a stretch the discuss games such as these when doing a film review – sacrilege, some might yell – but those things are surely partly to blame for the absolutely lunacy and collision of ideas that take place in Prisoners of the Ghostland, a smorgasbord of everything and anything (somewhat) that could have only been conceived during an excessively drunk night of game frivolities?

We almost don’t want to say anything about the new film from director Sion Sono so you can enjoy the absolute insanity that unfolds through the action/thriller/ghost story/Western which features some of the most outlandish ideas you have maybe ever seen. Oh, and best of all, it stars Nicolas Cage. That may help make a little more sense in some way. Anyway, The Cage plays a notorious bad guy who is released from prison by a local warlord (Bill Moseley) with a proposition: travel to the evil, mysterious Ghostlands to retrieve his adoptive granddaughter (Sofia Boutella) and gain his freedom, but with one big caveat – he must be strapped into a unique leather jacket that will explode in less than five days. Still with us? Gleefully excited by it all? You can’t write this stuff. 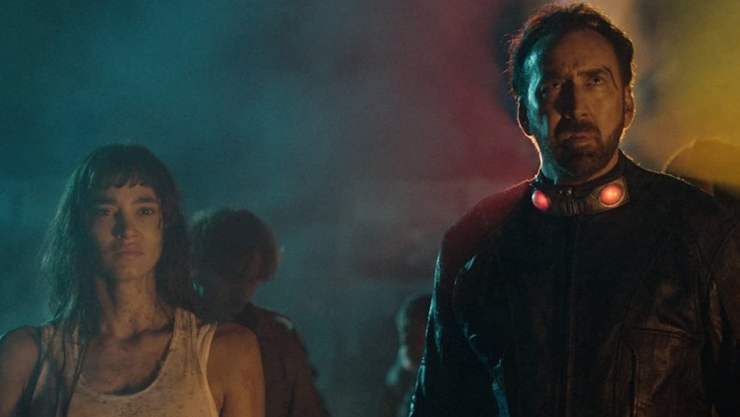 Sono, visionary director of Anti-Porno and The Forest of Love, is nothing if not bold and unique, on almost every level. His films are never anything but intriguing and full of big, outlandish ideas (this is the brainchild of screenwriters Aaron Hendry and Reza Sixo Safai)

that find a way to coalesce into a symphony of originality but even he may have bitten off more than he can chew with this one. Eye-poppingly hypnotic, Prisoners is a cavalcade of ferocious action, piercing images that will leave a lasting mark and beautiful cinematography. It is also absolutely bat-shit crazy that, for the most part, is an impenetrable mess that is at times a real endurance test. 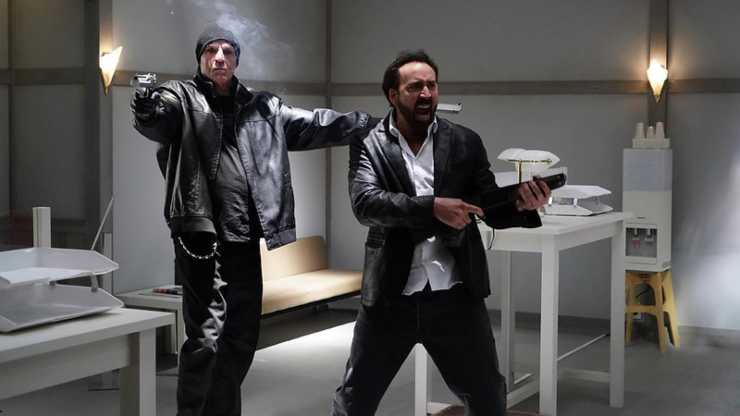 Thank goodness, then, for Cage who, as you would expect, throws himself in both the role and the world with the same excessive enthusiasm (let’s be honest, craziness) that he loves to indulge in. Here, we see him shout, scream, stare and scare like only he can, whilst enjoying some fighting shenanigans involving guns, samurai swords, mannequins and ratmen. Yep, ratmen. That’s where we go here, and Cage is at the wheel, so strap in tight and make sure the airbags are working.

There will be plenty who get a surreal kick out of Prisoners of the Ghostland and while it didn’t quite do it for us, the scope and scale – and indeed, cartoon lunacy – will certainly get the engines of many going into hyperdrive. We moan about the lack of ideas in Hollywood these days – well, you can’t say Sono and his screenwriters aren’t trying to buck the trend in the strangest and craziest way possible.