“Have Faith In Me”

Some of you know may know this as the title of a popular A Day to Remember song, others may relate it to religion, but in the wrestling world it is now the moniker of Seth Rollins, perhaps the most creative and ever-evolving wrestler in the business today, behind Chris Jericho, obviously.

But Jericho has had 20+ years to mix things up. Seth Rollins has been on WWE’s main roster since 2012, infamously starting out as part of the breakout faction, the Shield. Since then, Rollins has cemented himself as a world-renowned superstar in WWE and a mainstay in the main event scene of RAW since at least 2016. Even in the space of 4 years, Rollins has played the ‘heel’ and ‘babyface’ characters to different extents, under different gimmicks and against a variety of opponents. 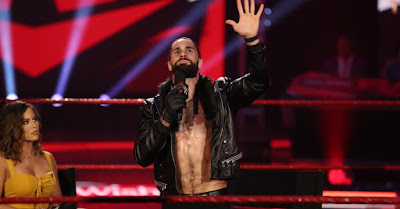 During these very uncertain and unique circumstances in the world, wrestling has had to evolve. And Rollins has done so too. Some may argue that creative incentives might aid a superstar in the transition from one character to another. Many superstars have referred to the old classic “we have plans for you” line that they have heard from the mouth of one Vincent K McMahon, only to end up unemployed a few months later. But for me, the overwhelming factor that contributes to that push for change is the crowd. If they’re not liking what you’re doing, you have to get creative. No one would deny that Rollins was faced with this dilemma when the increasingly popular character of ‘The Fiend’ came for his Universal Title at the tail end of last year. Naturally, the crowd turned on him in clamour of the Fiend being the champion.

Fast forward a few months and Seth Rollins is a new man. He has transformed into the ‘Monday Night Messiah’ who is here to purge WWE from sinners. This creepy, quasi-cult gimmick has naturally meant the formation of a new faction as the now veteran Rollins takes young starlets like Murphy and Austin Theory under his wing. As their undivided leader, Rollins has become more heel than ever, laying out dastardly attacks on Drew McIntyre, Aleister Black and Rey Mysterio to name but a few. And, character aside having some stellar matches too.

Straight from the horse’s mouth, on an episode of After the Bell hosted by Corey Graves, Rollins said:

“This character is so far from who I am, it’s like the opposite. It’s cool to see how naturally you can evolve and change into something totally different.”

Of course, right now it is slightly harder to gauge how a character is getting on because there’s no live crowd in the arena to react to it. There’s always Twitter, which in the wrestling world seems to be as polarising as ever. I am very keen to see if a live crowd would take to Rollins’ new gimmick, or whether it would fall flat, much like the reaction to him did during his latest babyface run as champion.

That being said, these are unprecedented times. And whether you’re a big Seth Rollins fan or not, he has created and evolved a new character, completely new to any version of him we’ve seen before and continues not only to be in the main event picture, but to keep people talking.