To celebrate the release of BLACK RAINBOW– available on Blu-ray 6th July from Arrow Video – we have a copy up for grabs!

Mike Hodges (Flash Gordon, Get Carter) wrote and directed this supernatural chiller as a meditation on the 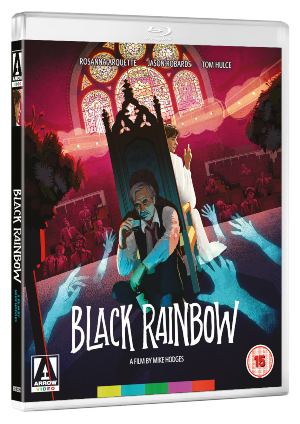 human race’s ability to destroy the world, a gothic tale of suspense and the occult, guaranteed to send shivers down your spine.

Martha Travis (Rosanna Arquette, Pulp Fiction, Crash) is a travelling clairvoyant on the road with her sceptic father (Jason Robards, Once Upon a Time in the West, Magnolia). During a séance Martha communicates a message from a dead man to his wife in the audience. Shocked, the wife insists her husband is still alive. Later that evening the husband is killed by a ruthless assassin. As Martha foresees more and more tragic events journalist Gary Wallace (Tom Hulce, Amadeus, Animal House) follows the pair in pursuit of a hot story… with catastrophically eerie results.

Sent direct-to-video by its struggling distributor on initial release, Black Rainbow unfairly never got the exposure it deserved, newly restored from the original negative audiences can now discover the darkness at the end of the rainbow, as never before.

Order today: https://arrowfilms.com/product-detail/black-rainbow-blu-ray/FCD2041
We have a Blu-Ray copy of Black Rainbow, please answer this easy question…

– 1 (one) winners will receive 1 (one)Black Rainbow on Blu-Ray.
– There is no cash or another alternative to the prize stated and the prize is not transferable and no part or parts of the prize may be substituted for other benefits, items or additions.
– The winner will be picked at random. The prize will be delivered to the winner within 28 days of confirmation of delivery address.
– Comp hosted on behalf of Arrow Video will deliver the prize to winning entry.
– The Editor’s decision is final and binding on the entrants. No correspondence will be entered into.
– The promoter of this competition is The Peoples Movies.
– You must be at least 15 years old to enter.
– The competition is not opened to employees, family, friends of The Peoples Movies, Arrow Video
– The Peoples Movies takes no responsibility for delayed, lost, stolen prizes as 99% won’t be coming from us but directly from the promoter.
– Prizes may take from days to a few months for delivery which is out of our control so please do not complain
– The winning entries will be picked at random and contacted by email for postal details and will be announced via facebook, sometimes we are unable to confirm winners directly.
– Uk or Irish entries only