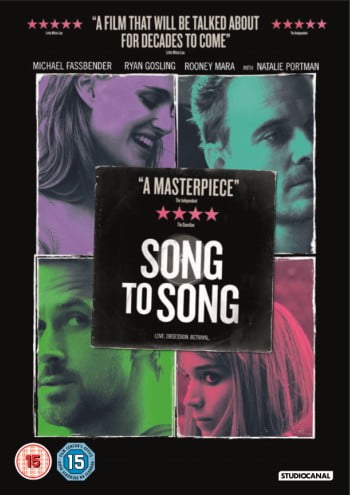 STUDIOCANAL is pleased to announce that from cinematic master Terrence Malick (The Tree of Life, To The Wonder), comes SONG TO SONG – a story of a lyrical love triangle – that will be available on DVD and Digital Download from 25th September 2017. To celebrate, we’re giving away a DVD to two lucky winners!

With cameos from music scene stars including Florence Welch, Iggy Pop and The Red Hot Chilli Peppers and a soundtrack including Bob Dylan and Patti Smith, SONG TO SONG a vibrant and alluring exploration into music, love and the turbulent Texan rock and roll scene.

To be in with a chance of winning, just answer this question:

Q.Which one of these Terrence Malick films does not star Natalie Portman?

SONG TO SONG will be available on DVD and Digital Download on 25 September
Pre-order now: http://amzn.to/2y2VVAw

– 2 (two) winners will receive 1 (one) Song To Song On DVD.
– There is no cash or other alternative to the prize stated and the prize is not transferable and no part or parts of the prize may be substituted for other benefits, items or additions.
– The winner will be picked at random. The prize will be delivered to the winner within 28 days of confirmation of delivery address.
– Comp hosted on behalf of Studiocanal will deliver the prize to winning entry.
– The Editor’s decision is final and binding on the entrants. No correspondence will be entered into.
– The promoter of this competition is studiocanal.
– You must be at least 15 years old to enter.
– The competition is not opened to employees, family, friends of The Peoples Movies , studiocanal.
– The Peoples Movies, Cinehouse takes no responsibility for delayed, lost, stolen prizes as 99% won’t be coming from us but directly from promoter.
– Prizes may take from days to a few months for delivery which is out of our control so please do not complain
– The winning entries will be picked at random and contacted by email for postal details and will be announced via facebook, sometimes we are unable to confirm winners directly.
– Uk or Irish entries only