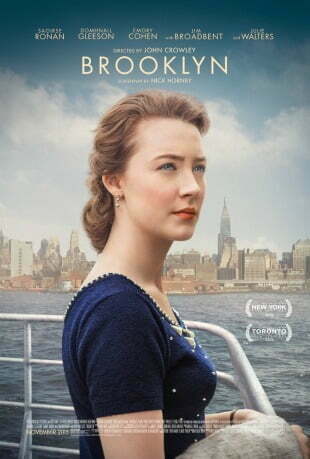 A young woman must make the difficult choices that will define the rest of her life as the BAFTA and Academy Award®-nominated Brooklyn arrives on Blu-ray, DVD and EST from today February 29th, courtesy of Lionsgate Home Entertainment.

Based on the award-winning novel by Colm Tôibín and transformed into a BAFTA and Academy Award®nominated screenplay by Nick Hornby, Brooklyn stars 2016 BAFTA and Academy Award® nominee Saoirse Ronan (Hanna, Atonement) as Eilis, a young woman who moves from small town Ireland to Brooklyn, where she has the opportunity for work, for a future – and love, in the form of Italian-American, Tony (Emory Cohen The Place Beyond The Pines). When a family tragedy forces her to return to Ireland, she finds herself drawn back into the life she left behind. As a secret threatens to reveal itself, Eilis has to confront a terrible dilemma – a heart-breaking choice between two men and two countries.

2016 BAFTA Best Supporting Actress nominee Julie Walters (Harry Potter franchise),Academy Award® Winner Jim Broadbent (The Lady in the Van, Iris), and Domhnall Gleeson (Star Wars: The Force Awakens) also star in this beautifully told story. Surprisingly funny and yet deeply moving, Brooklyn is about the meaning of ‘home’ and the intricacies of the human heart and is an emotional tour de force that has already garnered plenty of awards attention including Golden Globe and Screen Actors Guild nods, five British Independent Film Award nominations and a Best Actress Award for Ronan from the New York Critics’ Circle.

As noted, the film is now also fresh from receiving three Academy Award® nominations for Best Film, Best Actress and Best Adapted Screenplay. Add to that those BAFTA nods for Best Actress, Best Supporting Actress, Outstanding British Film, Adapted Screenplay along with nominations for Make-up & Hair and Costume Design and Brooklyn is firmly cemented as the year’s first essential home entertainment title as awards season gets into full swing.

Courtesy of Lionsgate Film we have a copy of the book Brooklyn is based on and a signed poster. To be that lucky winner please answer the following question…

Q.Who wrote the novel Brooklyn film is based on?

1.The competition is not opened to employees, family, friends of The Peoples Movies ,Lionsgate Home Entertainment. All Rights Reserved .No alternative prize is available 15 years or older to enter 3.Failure to include any information required to enter could result in your entry been void.  4.automated entries are not allowed and will be disqualified, which could result you been banned, DO NOT INCLUDE telephone numbers as for security reason your entry will be deleted.5.If you are friend or like us at facebook for every competition you enter you get double entry, but you must stay friend/like us all the time,or future entries maybe considered one entry if you are liking us share the post on facebook and re-tweet the post.6.The Peoples Movies, Cinehouse takes no responsibility for delayed, lost, stolen prizes 7.Prizes may take from days to a few months for delivery which is out of our control so please do not complain 8.The winning entries will be picked at random and contacted by email for postal details and will be announced via facebook, sometimes we are unable to confirm winners. Uk & Irish entries only

Until September of last year, conman Jason Derek Brown had been on the FBI’s top