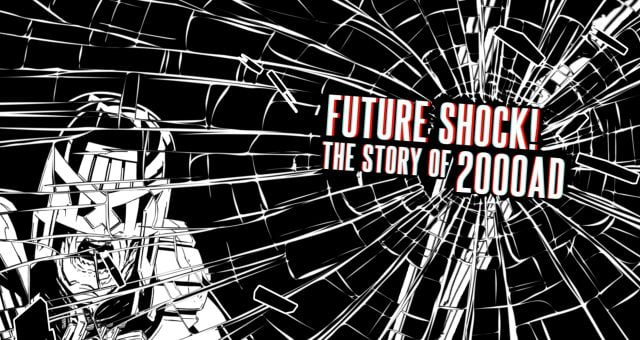 The latest in a long-line of pop-culture documentaries that capture the zeitgeist of their particular subject matter, Future Shock! The Story of 2000AD tells the story of the UK science-fiction comic that changed the face of the industry – a comprehensive overview of its history, a warts-and-all. A peek inside the creative process of its most famous creators, and a funny, moving and passionate chronicle of how a band of talented eccentrics assembled to create a visionary and extraordinary comic that’s still a game-changer 36 years on.

First published in 1977, 2000AD was violent, anti-authoritarian, blackly funny and above all, idiosyncratically British… and was – at its birth – seen as a dangerous, anarchic and totally anti-establishment. Yet it’s hard to comprehend, as someone who grew up seeing 2000AD on the shelves of newsagents, that the story behind what is now a British institution was so fraught with controversy. You see, as a kid I just took the stories at face value, not understanding the vast array of political and sociological undertones that ran through many of the comics stories. For me 2000AD was merely an ultra-violent, black and white, “heavy metal” comic that was the antithesis of the brightly coloured American cartoon tie-in comics that I also loved to read. How naive was I?

Comprised of a series of talking head interviews with familiar faces in the UK comics scene, incuding Brian Bolland, Grant Morrison, John Wagner, Andy Diggle, Rob Williams and the godfather of 2000AD, Pat Mills, Future Shock! The Story of 2000AD is a raw, unflinching and unfilitered look at the comic – and its not afraid of burning a few bridges, really telling it like it was (and yes, Pat Mills’ long-standing issues surrounding 2000AD is still on show here, even if it’s not quite so vociferous)

Its refreshing to see a documentary that doesn’t shy away from telling the ugly truth about its subject matter. Future Shock! trawls through the highs AND the lows of working for 2000AD, including the ridiculous notion that anything created for the comic was the publishers property and the copyright did not, as should be the case, stay with the authour/artist/whatever. It’s a situation that, coupled with the DCs bold move to explore the UK comic creator “market” and hire this countries burgeoning talent, would see 2000AD suffer… and would see the rise of DC’s Vertigo line, essentially an American version of what 2000AD was doing in the late 70s/early 80s.

Covered less so in the film is the fallow 90s period of the book, when 2000AD was part of the Fleetway/Egmont family – although what you do take away from that part of the documentary is that the 90s was just aperiod when the comic was a shit-filled weekly that, had it not been such a British institution, would have probably been cancelled way before some of the schlock that appeared in its pages hit the newsstands. Oh, and then there’s the discussion about the Judge Dredd movie and the subsequent Hollywood “push”, which would backfire considerably for the publishers!

A fascinating look into the rise-fall-rise-fall and eventual ressurection of 2000AD, courtesy of Rebellion, Future Shock! is essential viewing for fans of 2000AD, comic fans, comic historians, documentary fans – hell anyone who loves pop culture! Yet, if there’s one thing I took from this film, its that we need Alan Moore to write more Halo Jones… If he can have that much of an effect on Neil Gaiman, then that story needs to be continued.