Little Women ‘Coming Home’ In May

Watch The Awesome Trailer For 35mm Dystopian The Archivist

Despite the gruesome creatures, flying limbs and buckets of blood, horror as a genre can feel pretty stale. For every excellent film there is a dozen forgettable or terrible ones. And there are so many that it takes a lot of wading through the rubbish to get to the interesting stuff. For each day in October I’m going to recommend a different horror film or film about horror.  For the most part they won’t be the accepted classics. My selections range from the genuinely excellent to the delightfully strange with a few that are more fascinating than they are great. Hopefully there will be something for everyone and you’ll find something new to give you a scare or maybe a laugh. This is my 31 days of Horror and today I’m talking about:Ravenous.

Earlier today the British director Antonia Bird (Priest, Face, Ravenous) passed away. I was already intending to write about this film and this is not intended to eulogise her, I just thought it was right to acknowledge this very sad news.

In the 70’s and 80’s cannibal movies were a staple of the horror genre. A lot of the time this was because it was an excuse to have a lot of gore. There’s also something uniquely scary about cannibals. Eating human meat goes against our base morality to such an extent that I think it’s partially why zombies are now more popular than cannibals. The popularisation of zombies is also because it takes away any guilt in thinking of “cool” ways to see zombies killed since they’re already dead. One of the best cannibal films in recent years is Antonia Bird’s Ravenous (1999). So many cannibal films are just schlock but Ravenous subverts that expectation in a lot of cool ways. It’s really beautiful, thoughtful and funny too. There are also some fantastic performances and an excellent score. While it isn’t an incredibly scary film it is really entertaining and just a great film in general.

In a moment of cowardice, Second Lieutenant Boyd (Guy Pearce) plays dead on the battlefield during the Mexican-American War of the 1840’s. He ends up getting taken back to the Mexican headquarters amongst the rest of the dead. In a moment of bravery he surprises the enemy and successfully capture’s the base. This gets Boyd promoted to Captain but his commanding officer knows about his cowardly act on the battlefield. The commanding officer sends Boyd to the remote Fort Spencer in the Sierra Nevada Mountains as a punishment. There are only seven other people living at the fort until a mysterious man named Colqhoun (Robert Carlyle) appears. He says his wagon trail party were lead astray by their guide. They ended up lost in the woods with no provisions and had to resort to cannibalism to survive. He says that they were holed up in a cave but he left because he couldn’t stand it anymore. The soldiers decide to find this cave and search for survivors. They’re warned by their Native American guide about the myth of the Wendigo. That when a man eats of another mans flesh he gains strength but is also possessed by the desire for more flesh. As they journey into the woods they soon discover the truth of Colqhoun’s tale as well as the truth behind the Wendigo. 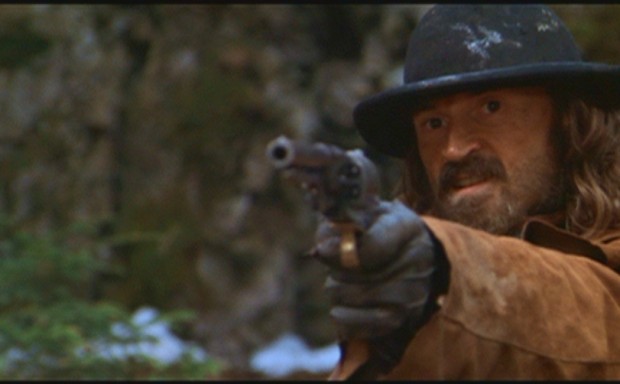 You would think that every horror-comedy would be a black comedy since death is often involved but it’s not always the case. More often than not horror-comedies are pretty wacky or silly in their humour. Ravenous is at times a truly black comedy. It retains a dark tone but will throw out some amazingly funny lines. Something that aids this is are the performances. The film is just full of awesome actors. It’s got Guy Pearce (Memento), Robert Carlyle (Trainspotting), Jeffrey Jones (Ferris Bueller’s Day Off), David Arquette (Scream), Jeremy Davies (Lost) and Neal McDonough (Minority Report). A bunch of cool character actors who bring a lot of weight to what could be a pretty silly story at times. Their seriousness when they deliver some of the dafter lines retains the gravity of each situation but is still a lot of fun. As things ramp up towards the end it loses a little bit of the tension but it’s just a blast. Pearce, Carlyle and Jones in particular are clearly having a good time in these roles. Pearce’s weak man trying to be strong and Carlyle’s gleefully villainous Calqhoun are such an enjoyable contrast and they play off each other perfectly.

What I think separates Ravenous from a lot of other somewhat-silly horror films is how incredibly well put together it is. Visually it mixes the beautiful with the utterly grotesque. Boyd’s experience amongst the dead in Mexico has left him disgusted by meat. This leads to some particularly nasty depictions of people eating early on, as we see his revulsion from his point of view. But then he is moved to the mountains and although it’s a lonely place it is amazingly pretty. This beauty subverts the earlier grotesquery but also sets us up for the unpleasantness to come. It lulls Boyd, as well as us, into a temporary tranquillity. Each of the increasingly intense action/suspense sequences are also really well shot as well as being inventive. The wonderful score by Michael Nyman and Blur/Gorrilaz’s Damon Albarn really adds to the mood. It’s hard to make a supernatural-infused cannibal tale feel very serious but the visuals, music and performances really help in drawing us in. Unless it’s Psycho or an Argento film, horror score’s can often be a bit forgettable. A lot of the time music is used as an extra jump-scare tactic as seen in things like Insidious. But here it mixes between the idyllic, adventurous and suspenseful while also sounding vaguely period appropriate. It all lends a lot of weight to Boyd’s journey. He struggles with his cowardly past and in a lot of horror films this would come second to the frights. Not here. Boyd is always at the centre of the film. He has to confront his fears and discover what it takes to truly be brave. It sounds a little corny but the overall quality with which the film is made really makes the story work.

Throughout this series I have really tried to highlight unique horror films. Films that may not succeed on every level but have so much originality that they become much more impactful than a lot of the generic films that flood the genre. Ravenous is certainly not the scariest film I have talked about but it is completely unique. Bird brings so much beauty and style to what is typically a very ugly sub-genre. From the period setting and inventive score to the interesting cast there’s just no other horror film like this. It’s classy but pulpy and serious yet silly. It manages to be a character study, Western, comedy, cannibal-horror and adventure all at once; making for a really entertaining watch.