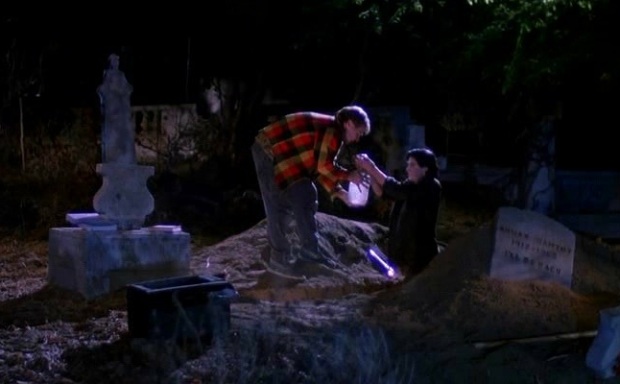 Despite the gruesome creatures, flying limbs and buckets of blood, horror as a genre can feel pretty stale. For every excellent film there is a dozen forgettable or terrible ones. And there are so many that it takes a lot of wading through the rubbish to get to the interesting stuff. For each day in October I’m going to recommend a different horror film or film about horror.  For the most part they won’t be the accepted classics. My selections range from the genuinely excellent to the delightfully strange with a few that are more fascinating than they are great. Hopefully there will be something for everyone and you’ll find something new to give you a scare or maybe a laugh. This is my 31 days of Horror and today I’m talking about:Blood Diner

There are plenty of films that are so ineptly made that they become comedies through their failures. One of the few genres that this rarely works for is comedy. Something like The Room shows how melodrama can be hilarious when done terribly but a bad joke is often just painful. But then you have something like Jackie Kong’s Blood Diner. It is a horror-comedy that sometimes works as intended but is also just so baffling and bizarrely written that the laughs come from unintended places. We’re meant to laugh at the inherent ridiculousness of a talking brain in a jar. But I don’t think we’re meant to laugh at some of these actors attempts at performances. It is a crazy-ass film with ancient evil goddesses, cannibalistic guys with a vegetarian restaurant and more than one guy dressed as Hitler.

Michael (Rick Burks) and George Tutman (Carl Crew) witness the death of their serial killer uncle Anwar Namtut (Drew Godderis) as children and it has a profound effect on them. Right before he is mown down in a hail of police gunfire he bequeaths onto them an ancient amulet as well as a religious book for the cult of Sheetar. She is an ancient dark goddess who can be resurrected with the right recipe and ritual. A feast made up of human meat must be created. When Michael and George grow up they run a vegetarian diner and it acts as the perfect front for their cannibalistic plans. To aid their attempts at resurrecting Sheetar they re-animate their uncle’s brain in a jar. The number of killings it takes to construct this feast draws the attention of the police. The detectives are getting closer to the boys but the boys are getting closer to their goal.

It’s hard to talk about such an insane film without just listing the myriad of strange things that happen but I’ll try keep that to a minimum. As I said it is a horror-comedy and does try to be funny but more often than not it’s not even the jokes that are what’s most humorous. Take the character of the detective for example. They do attempt comedy through him but it is so poorly put together. He is a mish mash of character tropes that barely makes sense and the actor’s performance is peculiar. When he’s introduced he is a somewhat nerdy but competent detective, a bit of a straight shooter. Then when he’s introduced to his new partner (a woman with what sounds like an English accent but it’s so all over the place it’s hard to tell) he tries to come on to her in outlandish ways. He’ll be talking to the police chief and then turn to her and start sloppily licking his lips or he’ll throw out an awful pick up line. It’s clearly meant to be funny how inept he is at talking to women but it just comes across as inexplicable. The performance goes from naught to crazy in seconds and this is kind of the through line for all of the performances. The aforementioned police chief is an equally schizophrenic character. When we first meet him he seems like a bit of a twist on the clichéd version of police chiefs. He’s a sweet Indian guy who really gets along with his head detective. He’s a far cry from the usual enraged police chief always threatening to throw their head detective “off the case”. But then in an instant he becomes that clichéd version of a police chief, albeit an exaggerated version. More than once he takes a swing at the detective out of nowhere. With a lot of “so-bad-it’s-good” movies you’re often putting up with boring dialogue to get to the entertaining stuff. But since this is attempting jokes it is always entertaining. Not that the jokes work like they’re meant to. It’s like watching a toddler try to tell jokes. They don’t really make sense but the sheer nonsensical nature of their attempts is what’s funny.

One weird thing that never really pays off in any way is the prevalence of Hitler impersonators. There’s a local wrestler who dresses as Hitler as well as a band who’s almost entirely made up of guys dressed as Hitler. There is no relation between the band and the wrestler; it’s just a trend or something. Touches like this are what make this film so absurdly special. Seemingly random events or recurring images pepper throughout the film. Like when the boys go clubbing and dress like Prince. No one else is dressed like that and no one even draws attention to how foolish they look. Then when they woo women with great lines such as,  “Hey baby, right before I stick my big sausage in you, what do they call ya?”. Again, the joke isn’t that they look ridiculous and their chat-up lines are awful. There is no joke. They succeed in picking up women even though they look and act horribly and one of them in particular is basically a cave man. Of course there are some genuinely funny moments that are intended that way. But for the most part it’s just non-stop madness and that is what’s fun.

Blood Diner is a sadly underappreciated “so-bad-it’s-good” movie. It’s got the acting of Samurai Cop, the insanity of Santa Sangre and the hilarity of Pieces (which I will talk about later in this series). Many of these types of films have a lot of down time but Blood Diner never lets up with the stupidity and the climax is brilliantly wild. While it may not be as well a made film as something like Return of the Living Dead, that’s part of the charm. Sure it’s idiotic but it’s incredibly entertaining. Sometimes amongst the genuine horrors there needs to be some levity. We need an outlet from the terror of other horror films. This is a perfect break from such films. A talking brain, a beheading via broom and a burger joint owner whose only customer is a puppet is just the tip of the iceberg of what glory this film has to offer.

Side Note: In one scene they commit a crime wearing masks of famous US Presidents so it’s safe to assume that Point Break is an unofficial sequel. It’s two leads are also blond-haired and dark-brown-haired. Coincidence? I think not.

Lemon Cassidy lives with her partner and son on a tiny farm in Appalachia. When