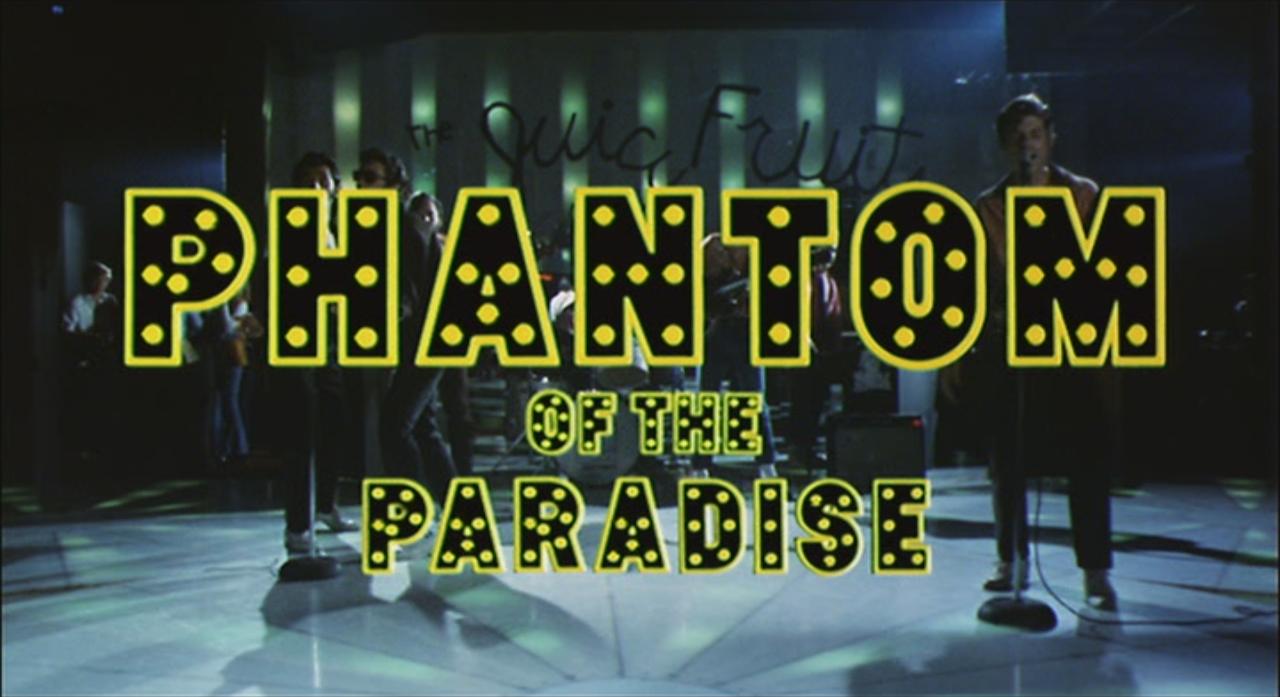 Despite the gruesome creatures, flying limbs and buckets of blood, horror as a genre can feel pretty stale. For every excellent film there is a dozen forgettable or terrible ones. And there are so many that it takes a lot of wading through the rubbish to get to the interesting stuff. For each day in October I’m going to recommend a different horror film or film about horror.  For the most part they won’t be the accepted classics. My selections range from the genuinely excellent to the delightfully strange with a few that are more fascinating than they are great. Hopefully there will be something for everyone and you’ll find something new to give you a scare or maybe a laugh. This is my 31 days of Horror and today I’m talking about: Phantom of the Paradise.

Now this film is probably the most loosely “horror” I’ve written about so far but it’s got horror elements and I think fits in with some of the kookier stuff. It is Brian De Palma’s 1974 comedy/fantasy/horror/musical Phantom of the Paradise. With a mix of Phantom of the Opera, Faust and The Portrait of Dorian Grey it tells a distinctively strange story. Then there’s the Paul Williams composed music that is great on its own but also serves as a tour of the different musical styles and trends of the 70’s. There are horror conventions thrown into this madcap musical so I think it fits in. Some excellent music and just so much fun, one of my favourites of De Palma’s and one of my favourite musicals too.

Composer and singer Winslow Leach (William Finley) thinks he has found his big break when superstar/record producer Swan (Paul Williams) discovers him. Swan hears Winslow playing a part of his musical adaptation of Faust and thinks it is the perfect song to open his new rock club, The Paradise, so he gets his lackey to steal it.  Before Winslow can retrieve his music he is framed by Swan for drug dealing. After an escape from prison Winslow finds himself getting mangled in a record press. With his face distorted he dons a mask and cape, becoming the Phantom of the Paradise.

I guess I have a bit of a confession to make. I’m not that crazy about Brian De Palma’s two most famous films Carrie and Scarface. Don’t get me wrong; they are very well made films. Scarface just never really connected with me very much and the same kind of goes for Carrie. For the longest time I thought I just didn’t get De Palma or that he was wildly overrated. That was until I saw Blow Out and Phantom of the Paradise. Blow Out is an incredibly stylish and suspenseful pseudo-remake of one of my favourite films, Michelangelo Antonioni’s Blow-Up. And then there was Phantom of the Paradise. It even included some of the things that had bothered me in other De Palma flicks. There are a lot of effects and visual tricks that are very specific to the time the film is made and they’re just very much of their time. But in the case of Phantom of the Paradise it worked perfectly. As a snapshot of this point in time for the music industry and music in general it’s wonderful. The 70’s stylistic touches, the costumes, the music, how people speak and just everything capture this point in history pitch perfectly. De Palma’s penchant for visual extravagance and current trends make this an impeccable time capsule of this period in the 70’s. On top off all the other stuff the film does well, De Palma is what elevates it to the next level of amazing.

The real star of Phantom of the Paradise is Paul Williams’ excellent music. If I had to throw a criticism at the film it would be that there is not enough songs. We are treated to most of the major musical genres of the 70’s. There’s Beach Boys style 50’s throwback tunes, pop ballads, folk, funk, surf rock and with Gerrit Graham’s hilarious character Beef we have glam rock. So many different genres are touched upon but they all feel consistent with the tone of the film. They all fit in with Paul Williams’ character Swan, as he is a man with a finger in every musical pie. He has a stranglehold on the music industry and his devilishness may go further than just shady business tactics. His character epitomises everything wrong with the music industry. He steals true artists work, enforces his will with thugs and his way of casting singers relies less on their abilities as much as it does their willingness to do as he pleases. Winslow has to become the twisted monster he becomes to try take down Swan. What drives him is love for Phoenix (Jessica Harper), his love of music and his hatred for everything Swan stands for. That’s what separates a true artist from the likes of Swan. Fame, fortune and adoration are not what he needs. He has an artistic vision he wants realised and Phoenix is perfect for it. For a character that becomes so monstrous he is an icon of artistic integrity. His naivety about the industry is what initially dooms him but then his love for music helps push him on to victory.

As I said the horror elements are pretty slight but they’re definitely there. Winslow becoming The Phantom in itself has a creepiness to it. There’s also a tragic side when his vocal cords are destroyed. He does get to sing again though, albeit through an electronic voice modulator. The beauty of his music remains but through the filter of Swan’s machine it has become distorted. This is the real horror of the whole film; the horror of an artist being warped by the music industry. His vision will never be truly realised because of the selfishness of Swan. Winslow’s anger first encourages him to write even more feverishly but he soon resorts to violence. The Phantom is an imposing figure at times and a pitiful one at others. William Finley nails both sides perfectly.

Sometimes a break is needed between the bloodshed, bleakness and terror of most horror films. Phantom of the Paradise actually has some of these elements but filters them through a flamboyantly macabre musical. De Palma’s relentless stylishness makes it a visual treat and Paul Williams music is fantastic. It transports you to a fantastical vision of the 70’s music scene with some of the most enjoyable musical numbers on film. Why this isn’t as beloved as the slightly more crazy Rocky Horror Picture Show is beyond me. Phantom of the Paradise already has a cult of its own but it still deserves even more love. It’s one of the few cases where a bunch of disparate elements were mashed together in a way that is incredibly successful.

Side note: I also love its tagline, “He sold his soul for rock and roll”.