This year’s BFI London Film Festival offers several new films based on books, reflecting a common trend in modern cinema and the recent film industry and proving that intelligent story-telling is something that should transcend format and translate through alternate medium.  In some cases this is just loosely inspired by, where others can be straight page to screen interpretations.

Some of the key texts that follow this trend are Salman Rushdie’s debut screenplay for the European premiere adaptation of his Booker prize winning novel; MIDNIGHT’S CHILDREN. Directed by Deepa Mehta, this Official Competition film is a riveting allegorical saga that parallels the dramatic upheavals in one’s family history with the events that would define contemporary India. Salman Rushdie is conducting a Q&A on this and his career as a renowned cinephile on 15th October. 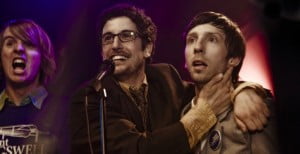 earlier this year. Adapted from Moshin Hamid’s best-selling novel, telling the story of a young Indian man who is living two lives, caught up in his big city stockbroker career and the unfolding conflict and persecution surrounding Pakistani extremists after 9/11, starring Riz Ahmed, Kate Hudson and Kiefer Sutherland.

In competition for Best Film this year is Cate Shortland’s LORE, taken from Rachel Seiffert’s Booker-shortlisted novel The Dark Room, chronicling the after effects of Nazi occupation through a group of children’s eyes.

Also in Official Competition is Jacques Audiard’s RUST AND BONE, a moving and inspirational drama starring Marion Cottilard that is based on a set of stories by Canadian writer Craig Davidson.

The LFF closing night film is Charles Dickens’ period classic; GREAT EXPECTATIONS, which has made household names of the likes of ‘Pip’, ‘Magwitch’ and arguably one of literature’s most melancholic character, ‘Miss Havisham’. All of the above pave the way for an entire collection of literary adaptations that are rife within this year’s programme.

EASY MONEY is the glamorous and mesmerizing adaptation of Jens Lapidus’s best selling- ‘Stockholm Noir Trilogy’. This silver screen version tells of the double life a poor student leads as he lives among the wealthy elite of Stockholm. This thrilling film, as directed by Daniѐl Espinosa,  follows the unfortunate scholar as drugs, the mob, and hitmen all alter his life and the lies he has been living.

Written and directed by Byun Youngjoo, HELPLESS is the adapted version of the Southern Korean mystery-thriller novel by Miyabe Miyuki. This thrilling on-screen account follows the twisting story line as a man searches for his fiancée who has seemingly disappeared without a trace, and the discoveries he finds about the woman he thought he knew and loved.

When a pair of college drop outs find themselves responsible for saving humanity due to the discovery of a new perception-bending drug, an entire world is opened by the perverse mind of director Don Coscarelli. JOHN DIES AT THE END is interestingly tailored from the adored book of the same name, to the silver screen in this expected cult status, mind bending film.

Director and Screenwriter Barnaby Southcombe’s debut feature is the London based, noir thriller
I, ANNA. Taken from Elsa Lewin’s novel of the same name, this version is told from the view of a femme fatale as she falls in love with an obsessive police detective. The woman’s mysterious dark secrets unravel through Southcombe’s wonderful depiction of this intense novel.

Sleep paralysis, dreamscapes and hallucinations are explored in a narrative designed to make you unconditionally