Since its debut away back at this years Sundance film festival, Beasts Of The Southern Winds has been a hit at every festival its been too, sweeping the awards that’s been nominated for.  Featuring an awards-touted performance from it’s 8-year old star Quvenzhane Wallis, it glows with an irrepressible and life-affirming power that has enchanted audiences and critics at worldwide.

To celebrate the Beasts of The Southern Wind UK release this October Studiocanal today have sent us the UK trailer. 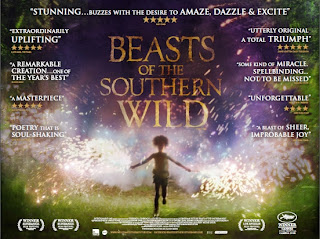 In a forgotten but defiant bayou community cut off from the world by a
sprawling levee, six year-old Hushpuppy exists on the brink of
orphanhood. Her mother long gone, and her father Wink a wildman on a
perpetual spree, Hushpuppy is left to her own devices on an isolated
compound filled with semi-feral animals. She perceives the natural world to be a fragile web of living, breathing, squirting things, in which
the entire universe depends on everything fitting together just right.
So when a hundred year storm raises the waters around her town, her
daddy is suddenly stricken with illness, and fierce pre-historic
creatures awaken from their frozen graves to come charging across the
planet, Hushpuppy sees the natural order of everything she holds dear collapsing around her. Desperate to repair the structure of her world in order to save her ailing father and sinking home, this tiny hero must learn to survive an unstoppable catastrophe of epic proportions.

Waters gonna rise up, wild animals gonna re-run from the grave, and everything south of the levee is goin’ under, in this tale of a six year-old named Hushpuppy, who lives with her daddy at the edge of the world.

Like the Raid I’ve tried my best to avoid the press, any previous footage to make sure the film is coming to UK, saving my enjoyment for the release and has helped me climb onboard the buzz for film .Beasts of The Southern Wind  is finally coming to UK&Ireland October 19th thanks to Studiocanal and don’t be surprised when February comes it will be picking up at least a Oscar award especially it’s bright young star who is only 8 years old!. The film also stars Dwight Henry, Levi Easterly, and Gina Montana.