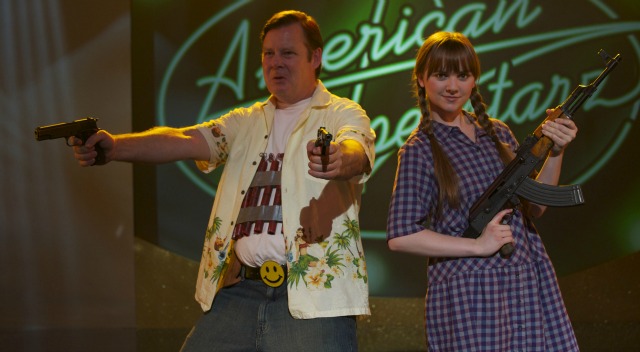 Is there any better fantasy than using a baby as a clay pigeon? The shrill screaming silenced by the sound of a pump-action shotgun unloading into the small fleshy blob, erupting in a truly outrageous amount of blood is enough to make one squirm with joy a coax out a child-like giggle from the viewer. This may be a bit morbid for some but that’s exactly why director and writer Bobcat Goldthwait makes this the first scene of his new feature God Bless America. The audience can decide immediately whether they’re in for the ride or need to run back to the ticket office to demand a refund.

Syracuse, NY. Frank (Joel Murray) is having a bit of a rough time. Frank lives alone tormented my persistent, sharp headaches and neighbours that do little more than regurgitate the mindless garbage that flow into their home through the television. At work he must hear more of this dribble from his co-workers. His attempt at some happiness is refused when his daughter decides he is no fun and isn’t worth spending time with unless she get’s something out of it. His ex-wife does little more than cater to the girls every whim, which in turn is shaping this little monster’s future outlook on life. As if all this wasn’t enough his apathetic doctor has just informed him of an inoperable tumour growing inside Frank’s brain while negotiating the specifics of his new automobile on a mobile phone.

Given up on the world, Frank finds his old service weapon and prepares for his suicide. As his tongue tastes the coolness of the barrel, reality television spews from the set and Frank has an epiphany. There are many people who deserve to die so if he’s going to die anyway he should at least take a few others out before his time has come. After killing one of the brats from MTV’s My Super Sweet Sixteen, Roxy (Tara Lynne Barr) a fellow schoolmate and loather of douchebags teams up with Frank to murder anyone and everyone who deserves to die.

The concept of this film is brilliant in its simplicity. Who hasn’t thought to themselves about someone deserving some sort of physical violence inflicted on them because of their personality or behaviour? Maybe not murder but this is a movie after all and waiting for karma to step in and do its thing doesn’t make for entertaining films. A particularly engrossing scene plays out in a cinema with a group of noisy teens that is sure to please all cinephiles.

The main point of the film is we could all find ourselves at the end of Frank’s pistol, including the likes of Frank and Roxy. If you’re someone who cannot fathom this notion then this film isn’t for you. At times Frank’s message of decency and working for real connections with people rather than virtual ones does feel like it’s being forced on you, it’s not necessarily wrong. Today it does seem as though people don’t take the time to form their own opinions on what’s going on in the new and around the world and simply regurgitate whatever they hear on TV or social media outlets.

It may be a little bit of the old man shouting, “Get of my lawn you damn kids,” but the story coaxes you into caring about these characters and supporting their not-unreasonable cause. The spoiled girl is allowed to die because Frank and Roxy take the time to kill the God-Hates-Fags group. If the hated by all groups at least get what’s coming to them, it’s easier to get away with killing a young girl who is truly horrible in her own right. Frank and Roxy bond over a game of Russian Roulette using an inflated balloon as their bullet, submitting themselves — at least figuratively — to the same rampage their inflicting on their victims.

With all the murdering and smiling faces, it should be easy to remember this is a sort of fantasy film. Of course these characters are insane for wanting to kill everyone who is involved in or watches reality television but isn’t this why we have the movies? Don’t we want to escape from what’s going on around us and live in a universe where we can put a bullet in heads of bigots and selfish people? Shouldn’t we be asking ourselves why the Kardashian’s are famous? It is a one-joke premise sort of film but the joke is always changing its shape. The dry humour blends well with the narrative’s message altering God Bless America from a statement to a question. Who knows, maybe the world could use a new Mickey and Mallory Knox for the social networking generation.