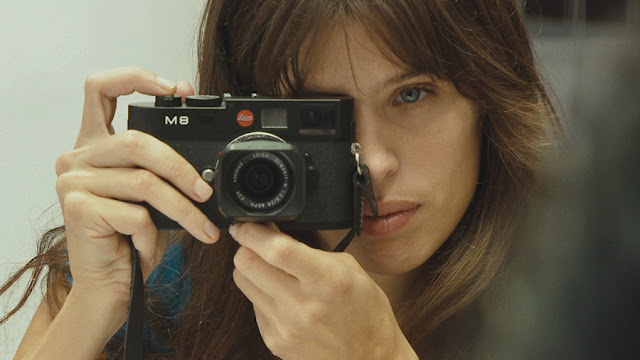 Winner of the Jury Prize at Cannes early last year, Maïwenn’s sprawling examination of a team of social service workers based in Paris (a ‘Child Protection Unit’) cracks and fizzes with a riled and tenacious energy; the kind that emanates from an unblinking sense of engagement with the film’s emotionally volatile content — paedophilia, abuse, neglect and separation, amongst other things, become deadening motifs of the unit’s day-to-day operations, and Polisse observes the brave and often unsettling ways in which seasoned professionals cope in these situations.

Its focus spread over a myriad of characters over the course of a full season of policing, the film somewhat ambitiously charts not only the working lives of the officers within the unit —field work, interrogations, embattled bouts with bureaucracy and so forth— but also the lives they take back home with them once off the clock. No matter how hardened the routine becomes, neither character escapes untainted from the troubling evils so ubiquitous in their daily lives.

The muscular and craggy faced Fred (played with real life tough-guy authenticity by French rapper Joeystarr) is a brutish specimen of pure police; unyielding to thugs and immoral criminality; persistently poised to rattle the truth out of weasley situations. Yet his habit for taking the plights of victims all-too-personally leaves him hesitant to give his own daughter a bath behind closed doors.

Elsewhere, frizzy-haired Nadine (Karin Viard) has an ongoing court battle with an ex-husband who she can’t seem to let go of–a fact she confides to her misandrist colleague and abrasive opposite Iris (Marina Foïs). Their argumentative banter is initially played with broad comedy and sisterly conflict, but when their friendly hostility encroaches on deeply personal boundaries, the tragic outcome is an unexpected blow to the film’s notions of resilience and camaraderie. 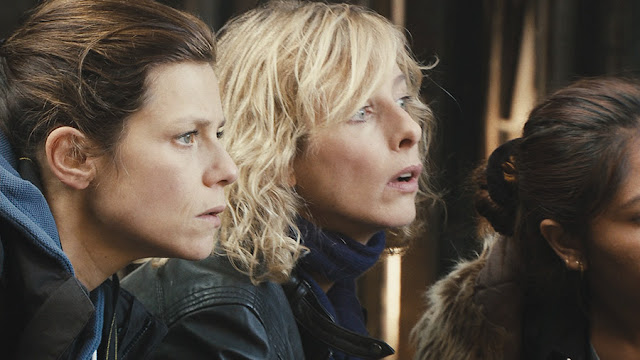 A smattering of strongly drawn supporting characters leave an impression —such as the hopelessly impotent and alcoholic unit supervisor Baloo (Frédéric Pierrot) and young intellectual Gabriel (Jérémie Elkaïm)— but unfortunately fall by the wayside as the film unspools.

Filmed with a lean, documentary-style verité, Polisse nonetheless tackles the high-stakes melodrama of the CPU with sweeping glances that keep the finer details at arms length. Its tendency to gloss over plot resolutions and case development lends more to an episodic structure based on a revolving door of victims and suspects, and ultimately underlines the fact that the screenplay —which was co-written by Emmanuelle Bercot— was penned from the point of view of an outsider looking in, struggling to encompass a wealth of ideas, stories and conflicts.

Maïwenn’s decision to cast herself as a photographer assigned to accompany and document the group consciously reflects this motive, and serves as a proxy for the viewer. Accepted into the close-knit group as cautiously as an adopted sister into a competitive and sibling-skewed foster family, the mousey and waifish Melissa is, at times, chastised for letting her emotions or better judgements get in the way of their mal-adjusted and confrontational habits. Consequently, we are suggested to do the same — if not for the sake of decency then for the sake of sanity.

Indeed, glib and politically-incorrect humour form an irresistible source of therapeutic relief for the CPU, and its treatment here is often jarring considering the taboo subject matter. Yet Polisse’s commitment to the messy underside of human behaviour means this tonal erraticism is par for the course. It doesn’t hurt that some set ups, such as a girl confessing to have performed sexual acts to retrieve a mobile phone, leads to some great one-liners. 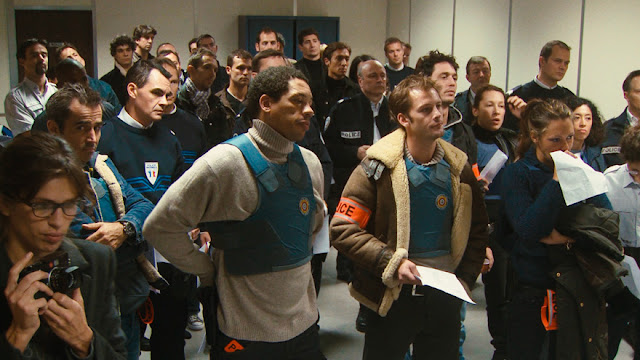 However, Maïwenn and her cinematographer Pierre Aïm’s passive camera is often at odds with some of her actors’ more forced tendencies: One of Fred’s explosive rants at a police chief ends in a prolonged and limp desk-upending tantrum; desk bickering seems to flare up out of sheer boredom and can lean into grating tedium. And a scene involving a Muslim officer’s (Naidra Ayadi) encounter with a strict, Koran-abiding patriarch intent on marrying off his underage daughter feels more like a mouthpiece for political views than a piece of embedded storytelling.

Whilst the ending hits like a full stop precariously thrown into the middle of a run-on sentence (one that lasts over two hours, mind), it nevertheless proves a fitting coda to the film’s near relentless push-pull of humour and bleakness, suffering and joy. Those conflicting tones are constantly rubbing up against each other moment by moment —abrasively so— and yet Maïwenn admirably finds the audacity to submerge the audience in that disorienting moral ground. For the most part, it works, with Maïwenn’s ability to stay an unobtrusive observer an asset to the film’s complex tangle of interpersonal and professional conflicts. The dense weight of the material is made consumable by her script’s humorous irreverence and emotional levity.