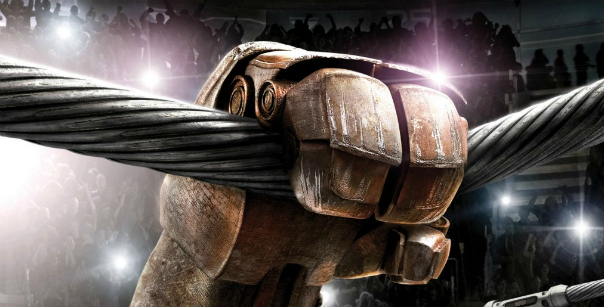 If the gossip that’s flying around the world wide web Michael Bay has made made up and kept his promise that Transformers: Dark Of The Moon is actually good after you’ve seen this you’ll be getting some withdrawl symptoms and in the need of some Robot fix, Dreamworks will have the answer…REAL STEEL! October 7th is when Dreamworks will unleash  Rock ‘em and Sock ‘em robots onto our big screens an action adventure which will get you the robot fix you’ll desire starring Hugh Jackman, Anthony Mackie, Evangeline Lilly, Kevin Durand, Hope Davis, James Rebhorn with Shawn Levy directing. Today on internetland Dreamworks  released their Japanese trailer which has found its way onto Youtube and there’s no need to search high & low for your Japanese phrasebooks as its in English (with Japanese subtitles) and if your looking for some big robo action you’ll get it here but with more. When I mean more, the trailer also concentrates on Jackman’s character Charlie Kenton a former washed up boxer now trainer we get the rocky style promo but we also get to see the family side of the movie, Charlie’s struggles to be the dad he should been many years before to his son  Max (Dakota Goya).

So what do you think guys ready for some 8 foot robots kicking some metal butt in a ring? Of course we are, check out a new 60 second tv spot for the movie aswell like the new trailer it includes some new footage!

A gritty, white-knuckle, action ride set in the near-future where the sport of boxing has gone high-tech, “Real Steel” stars Hugh Jackman as Charlie Kenton, a washed-up fighter who lost his chance at a title when 2000-pound, 8-foot-tall steel robots took over the ring. Now nothing but a small-time promoter, Charlie earns just enough money piecing together low-end bots from scrap metal to get from one underground boxing venue to the next. When Charlie hits rock bottom, he reluctantly teams up with his estranged son Max (Dakota Goyo) to build and train a championshipcontender. As the stakes in the brutal, no-holds-barred arena are raised, Charlie and Max, against all odds, get one last shot at a comeback.

“Real Steel” is directed by Shawn Levy (“Night at the Museum” franchise and “Date Night”).

“Real Steel” is an action drama about a former boxer (Hugh Jackman) who, against all odds,  gets one last shot at a comeback when he teams up with his estranged son (Dakota Goyo) to build and train the perfect contender for the new high-tech sport of robot boxing.

Cinema history is littered with good films that struggled to find their audience.  There’s as