Harley Quinn Is ‘Coming Home’ With Birds Of Prey This Month

Final Rick And Morty Season 4 Episodes Gets A Trailer! 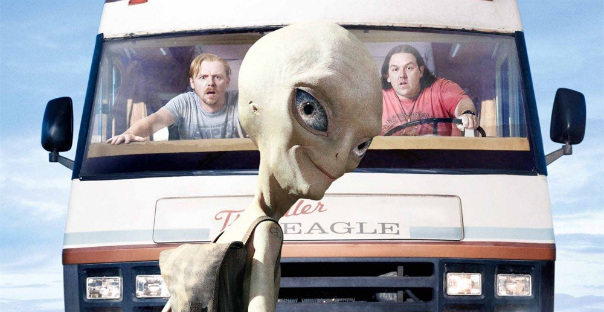 Comedy duo Simon Pegg and Nick Frost team up again in PAUL, an out of this world comedy about two comic book geeks trying to help a smart-ass alien escape to his mothership. The film is a celebration of sci-fi and features more than the occasional reference to science fiction movie classics.

To celebrate the 13th June release on Blu-ray and DVD, we’ve got hold of an interview piece below where Pegg and Frost reveal their five favourite Sci-fi scenes and characters. Then, after the jump we delve deeper into their choices to explore what makes them great….

ET – 1982
No surprises that this one made it in there, eh! Steven Speilberg’s seminal sci-fi masterpiece is an absolute cult classic that has inspired many throughout the ages. ET instantly became everyone’s’ favorite quotable green critter. However adorable he may sound, you probably didn’t know that his grizzly tone came courtesy of Pat Welsh, an elderly woman who lived in Marin County, California and smoked two packets of cigarettes a day!

Close Encounters – 1977
It may seem unlikely that aliens will rock up in a vehicle that looks like a giant, inverted Christmas tree, however this tale will leave you believing that anything is possible. Set against a backdrop of a secretive, omniscient government agents and conspiracy, this film has to be one of the classiest alien visitation stories ever committed to celluloid, even if the aliens were played by local 8 year old girls!

Blade Runner – 1982
Talk about cinematic beauty – Pegg and Frost have some serious style! The opening scene in this film is a mesmerizing longshot that scans over a futuristic city scape intertwined with the belching firestorms of industrialism. However futuristic the scene may look, it was created out of very intricate (if rather old-school) modeling sets. No computer CGI here, just a dedicated staff who shared a vision that will continue to leave its pixel-fated successors in its wake.

Fifth Element – 1997
Okay so the movie may have its flaws, but damn it’s a beauty! With over a 1000 costumes designed by one of France’s most famous fashion designers — Jean Paul Gaultier – the film seamlessly brings together miniatures, enormous sets, remote controlled alien costumes, digital effects and old-fashioned movie magic to create a world of limitless imagination.

Galaxy Quest – 1999
A cult hit making fun of cult fans, this film’s biggest success is that it realised and exploited Tim Allen’s Kirk-like persona, which, to the actor’s credit, he was more than willing to go along with. Even Star Trek’s Sulu, George Takei, praised its realistic-yet-hilarious spoofing of fandom and the show that made him famous: “I think it’s a chillingly realistic documentary…I was rolling in the aisles”.

Star Wars – A New Hope – 1977
Cinema has a unique ability to capture the intensity of mid-air dog fights, however very few films have come close to capturing the magic of George Lucas epic interstellar space battles. Simon Pegg’s favourite moment from the franchise involves Wedge saving Luke Skywalker’s bacon by shooting down a TIE Fighter that Luke had been unable to shake. Without Wedge there would be no Skywalker, therefore there would be no sequel, no prequel and no hope.

PAUL is available to own on Blu-ray and DVD on June 13 – pre-order a copy here http://bit.ly/henm9k

Want To Win A Copy of PAUL on DVD? Click HERE!