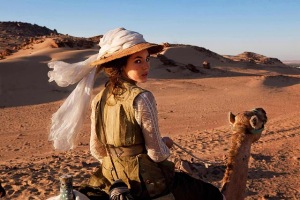 The Extraordinary Adventures of Adèle Blanc-Sec (2010)

In what became my third female superhero flick in two weeks, The Extraordinary Adventures of Adèle Blanc-Sec was easily the highlight of the three; a fantastical, unbridled mash-up of globe-trotting archeology, historical romanticism and sorcery, Luc Besson’s adaptation of Jacques Tardi’s serialised comic takes the most plucky elements from the director’s back catalogue and sets them against a delectably warm backdrop of 1911 Paris — the result being a wonderfully madcap throwback to the Saturday morning serials, comics and B-movies of our youth.

The plot, which has as many side-branches and parallel stories as you’d expect a serialised comic to have, follows expeditionist, novelist, archeologist and general Gertrude Bell analogue Adele in her quest to find a mummified Egyptian doctor who may hold the key to healing her paralysed sister. All the while back in France, a Methuselah-like professor manages to re-animate a fossilised dinosaur egg which then hatches a pterodactyl that proceeds to wreak havoc on the streets of Paris.

When a government minister meets his unfortunate end at the hands of the beast, the police, headed by blustering half-wit Albert Caponi (Gilles Lellouche), are called in to handle the situation. They enlist famous game-hunter Justin de Saint-Hubert (Jean-Paul Rouve) to ensure a quick slay — a fact that does not sit well with historical preservationists at the local museum.

But at the center of all of this is Adele.

Played by Louise Bourgoin, Adele possesses a dry, sardonic wit (“Blanc-Sec, like the dry white wine” she states) and a commanding intellectual superiority over those around her — an archetype that could be more commonly known as a ‘badass’ — and Bourgoin inhibits such indeliable magnetism in every scene.

It’s little wonder then that junior museum scientist Andrej (Nicolas Giraud) has fallen head-over-heels for her, his wide-eyed and hopeful gaze resembling that of a lovesick puppy. His relationship with scientific literature and the museum could hold the answer to taming the loose pterodactyl, and together with his professor superior, the band of heroes that convene around our heroin promotes the film’s central conceit that science, academia and rationality always hold greater virtue than brutish, hunter-like mentalities like those held by the police.

Besson realises a wistfully nostalgic Golden Age of early 20th Century pre-war France. Portly Parisian denizens pomp and wheeze. Their bulbous faces lovingly framed and illuminated by the director’s long-time collaborating cinematographer Thierry Arbogast. It’s in this romantic and hyper-real context that most of the cartoonish hijinks are able to flourish, despite their obvious absurdity. Ultimately the adventure is focused not on big, action-packed set-pieces like those in the Indiana Jones saga or even Besson’s own Fifth Element, but rather a series of screwball and comedic episodes that trade in thrills for charm, and spectacle for warmth.

Whilst following in the same tradition of such touchstones as Tin Tin, Indiana Jones and more recently The Mummy, Adele Blanc-Sec stands out most because of it’s titular female lead. With her punchy catchphrases and comic versatility, she makes this Extraordinary Adventure one that zips with joy, and there is never a down moment in Besson and Tardi’s hands.

Also of note is a scene of partial nudity where Adele strips off for a bath, which feels a little out of place considering it’s family-friendly demure. I’m not sure if the certification suffered because of it (I hope it didn’t and this deserves to be seen by as many children as possible), but it is handled with such refreshing non-chalance that I can only commend it for it’s progressive depiction of a non-sexualised female form in a family film.

This is the most fun I’ve had at the cinema in a long time.