Last Week I received some exclusive content from the Magazine FLAUNT Issue 108, an article/interview from Wolfman Star Benico Del Toro along with some content from previous issue for Vincent Cassel.

Thanks to Lily at The Confluence we have an interesting piece from issue 108 again on  Jacques Audiard, the Cannes Grand Jury Prize-winning French director of A Prophet, opens up to Flaunt about conventions of genre films and his refusal to adapt a moral point of view.

If you are interested in getting a copy of this magazine or simply want more information please click on the link below, I’ve also included links to the previous Flaunt magazine posts as well. 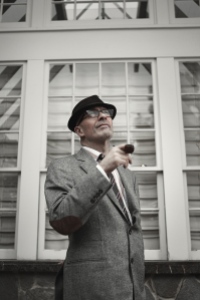 here’s something at first incongruous about French director Jacques Audiard smoking his pipe amongst the lush, backyard palms and philodendrons of the French Consulate General’s Beverly Hills home. It’s not so much an astutely continental manner and poise playing afternoon contrast against the spoils of Western expansion, but rather that this yard has fences, and their containment of the director, who smokes, paces, and smokes some more, seems questionable. Quite the ironic anvil as Audiard’s in town promoting his latest directorial effort, a prison film, A Prophet–the most recent Grand Jury Prize winner at the Cannes Film Festival–a piece of cinema that, like previous goes Read My Lips and The Beat that My Heart Skipped, stylishly beautifies brutality, crime, disability, and the human struggle to the searing effect of empathy and French noir cool.

Regarding the genre model and its potential, Audiard shares, “There are a lot of French particularities [in A Prophet]. But it’s a genre film. And genre is democratic. We tried to make a specifically French film, but genre allows it to travel. The use of this form reduces what’s at stake–a fight for territory, for money–and then after you can fit it with things that give it meaning. The first step on the ladder needs to be accessible.”

In the film, a young Arab, played by Tahar Rahim, immediately becomes a kingpin recruit for a Corsican gang. The character, Malik El Djebena, a fast learner who regularly scampers to shape opportunism into survival, undergoes a kind of growth that subverts the dehumanization process typically associated with prison. “There’s irony in him going to jail,” says Audiard. “He’s homeless, illiterate, and had he not been sent to jail he may have never understood that he was an individual. He’d have perhaps O.D.’d at some squat, perhaps prostituted himself. In that way he is not reformed, but formed. The boundaries of prison and the situations undergone are in fact very humanizing.”

Audiard’s decision “to use actors who are not actors, faces that don’t have associations” enables a “fiction treated like a documentary.” In regards to the complexities of these casting decisions, and their societal ramifications in France, Audiard says, “We didn’t make a social statement. But we did make a hero out of persons who are not represented, or who are usually represented as a kind of black–drug dealers, fundamentalists, terrorists–or a kind of white–those who fight racism and work a lot, are good people. It’s always about integration. But we didn’t want to make a film about integration. We wanted to make a film about after integration.”

Audiard seeks to sponge more from this particular genre’s conventions than mere recognition. “I’m exhausted of the conventions of good and evil and hero-making,” he says, “but you have to know how you’re going to use these tools. There are two approaches to reforming cinema today: you use cinema within cinema, but those films are just making citations. But another use of cinema is to use to the tools to represent reality, and that’s what I prefer.”

Inevitably, the prison film conjures questions of power structures, reformation, the absolution of wrong-doing, and male identity. For this, Audiard would prefer to stay removed and instead open a unique world of possibility. “It would be difficult to adapt a moral point of view,” he concludes. “Who am I to adapt a point of view? What I am proposing is a destiny that appears unconventional.”

A road movie.  One where a group of friends set off without telling their parents,