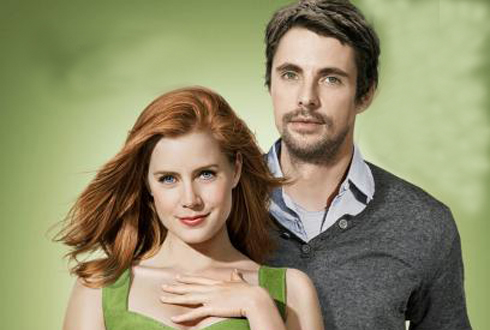 Here’s another review from my fellow LAMB (Large Association of Movie Blogs) member Travis McCollum of The Movie Encylopedia check out his blog and to get there just click on the source link at the end of his review for LEAP YEAR which is out this Friday (26th) in UK.

Hello I am the movie encyclopedia and if no one else will see it, I will.
Why do so many romantic comedies come out? I mean I see there appeal: family friendly (usually), charmingly funny, uplifting, predictable and usually feature a good cast. But besides the aesthetic aspect of each film and maybe besides the occasional twist they are the exact same movie. Boy/Girl meets Boy/Girl. They love/hate each other but through a quirky series of events they love/hate each other. Usually there is a reflective moment, a musical montage of good/bad events and in the end Boy/Girl and Boy/Girl live happily ever after. Throw in the thing that makes the film “unique” and you got yourselves a feel good film that while may not sway critics will sway audiences.
Don’t get me wrong I actually enjoy romantic comedies. My only major gripe is that every year there are more and more of them more and more frequently. Only rarely do we get a Notebook or a (500) Days of Summer film that really stretches the boundaries set forth by these films. So does Amy Adams new film stretch those boundaries? No..but its surprisingly decent.
The story of Leap Year revolves around Anna. She is a business woman with a great business oriented boyfriend. She is madly in love with him but when she gets denied a potential proposal and he leaves for Dublin (Ireland for people who don’t know) she decides to invoke an old Irish tradition which is explained by her dad (thanks John Lithgow cameo). So she heads off to Dublin but gets stopped and forced to land in Cardiff. Once there she meets the quiet, good looking, rugged but a bit of a smart ass Declan who is the local bar owner/taxi driver. He agrees to take her to Dublin for a price and off they go. Comical adventure ensues.
Well really for anyone who has seen a romantic comedy they already know what happens in this movie. In fact everyone probably does but we still sit through it all anyway. Its painstakingly hokey how its been overdone. But to the movies credit Amy Adams and Matthew Goode are really good actors and work well with the material, hokey, silly and predictable as it may be.
It’s a forgettable movie with a boring title, predictable story and stereotypical characters. But thanks to Adams and Goode the film actually works and is a charming film that kept my attention for 100 minutes. Worth a rent at least.
Review Source: The Movie Encyclopedia
MY VERDICT: RENT IT
MOVIE RATING: 2/5

Until September of last year, conman Jason Derek Brown had been on the FBI’s top