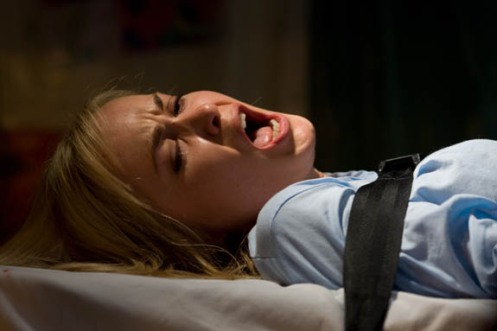 Share
Below is a new mini/teaser trailer for THE CRAZIES, its really short well 41 seconds to be precise. What this nice little teaser does apart from some new snippets of unseen footage bit it gives the whole movie a harder, darker and slightly scarier edge which we never really saw from the full trailers.

I have to say what has first started as a average B-Looking movie to one hell of good movie, a little bit like what zack Synder did for George C  Romero other classic movie Dawn of The Dead give it a refreshing rework but still pay homage and not ruin the original.

The 2010 version stars Timothy Olyphant and Radha Mitchell as Sherrif and wife based in a small mid-western American town whose water supply is contaminated by an mysterious toxin which turns the residents into insane pyschopaths and the remaining survivors group together to survive the insanity!.Here’s hoping what we’ve seen in this trailer as well as trailer two will follwing into the movie building the movie up to be a cracker!

more about “The Crazies: Mini Trailer“, posted with vodpod