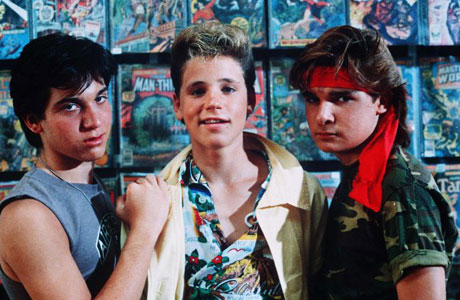 Another addition of News Bites, a small selection of some of the movie news stories floating around the internets movie press.

LOST BOYS 3 GOT A THIRST FOR A DIRECTOR

I did’nt even Know there was a Lost Boys 2 upto about a year or two ago but Lost Boys 3 is on the way and according to reports it has its director in place.  Dario Piana who brought us the THE DEATHS OF IAN STONE has been reported to be the new director of LOST BOYS 3: The Thirst which has been written by Evan Charnov. Corey Feldman and Jamieson Newlander will return as the frog brothers and The plot would follow a destitute and friendless Edgar Frog (Feldman) until wealthy vampire-romance writer called  Gwen Liebling  who will offer him a  barrell load of cash to hunt down Alpha Vampire D.J. Dusk in order to rescue her son.

Filming for the movie will start in November in South Africa.

CRONENBERG TO REMAKE THE FLY

Since 1986 when Cronenberg made the remake of the 1958 original version he has dodged offers to revisit the movie he made again. The Sequel was terrible and David Cronenberg hasnt wanted to be connected with the movie not until recently when he done a oprea version of the movie which premiered last year in Paris,France but now has given into temptation and has decided to jump on board.

The remake of the remake has actually started but it may have to wait a little while as he has a movie coming out before the remake called The Matarese Circle which will be out 2010. Fox are hoping Cronenberg will be a bit of freshness to the movie and hopefully can get some of the sucess of the recent Star Trek reboot, they hope he will write and direct the new version.

This taking the piss but Im not surprise but Universal Studios plan to make a live action version of Barbie, the popular girls toydolls. With G.I Joe and number of other well known toys and board games that have made it as a movie or soon to be a movie it was just a matter of time when the greenlight.

“Barbie is the most famous doll in history, a unique cultural icon in the world of brands,”

“So many representations of Barbie frequent pop culture. We’re grateful to Mattel for entrusting us with this extraordinary opportunity.”  said Marc Shmuger (Universal Pictures chairman) to Variety magazine.

One thing we can say which the actors of recent movies will find easy is the qaulity of performances, plastic

He Man has been snapped up by Sony Pictures after Joel Silver and Warner Bros number of years try to decide the direction to take the project and let the rights slip under there noses!.

It seems that the movie was not going to be about the 15 year old Dutch Jewish girl who was one of the victims of the Jewish Holocust, but a contemporary story of a girl who goes to Israel who learns about the truamas of suicide bombings. This sounds a very dark intense scary idea and even David Mamet himself seems a little concerned on the outcome as well, it does sound interesting project to do put I think if it was made it would have caused a uproar with the movieworld and possibly world jewish and arab communities.

As the Creation goes out on General release in U.K, the movie finally gets an American distibutor. The movie which will be released in December will be distributed by Newmarket films the company that brought The Passion of Christ. The movie stars Paul Bettnay as Charles Darwin whose scientific theories have upset the christian churches over the years and with a large percentage of U.S.A been followers of a sometimes conservative christian believes it’s not surprising its found it hard for someone to step forward.

U.K  in some communities have similar passions as American in religion though the movie has found no problems with distribution. What I have seen in UK pass day or two os the reviews and some critisms of the movie coming from the right side of British press and positive reviews from the Left/liberal press. In my own country there is many communities that are very traditional in there believes and still follow no work or play on sunday  but some people I know who still support this tradition dont see any problem with the movie. I am a firm believer of  free speech and the right to follow a religion and films like Creation should have the right to be shown and not be banned due to a few groups who think we should still be living in the stone age.

So if America is the so called land of freedom of speech why has it taken so long for a simple movie to get a distributor?

It’s not a great title.  One so generic it could have been chosen by committee.

Win A Beautiful Day in the Neighbourhood On Blu-ray